This post should have been written nearly a month ago but I just did not have the time. There are many things happened and I was so occupied getting them all through. I was so busy preparing my travel documents, turned 23, and opened a small office for ColorLabs just next to my house. I guess every day was a big day. 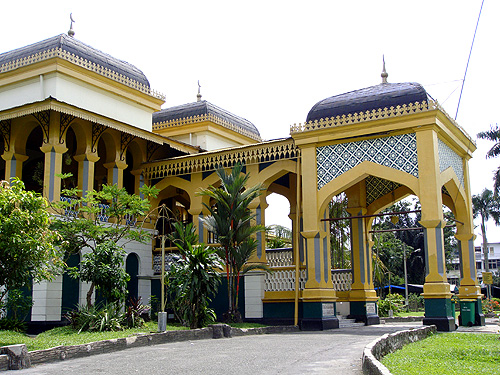 I spent my last day of the trip in Medan to visit Istana Maimoon. It is a palace designed with Malay-Islamic architecture and was the centre of the government of Kesultanan Deli. As I’ve already mentioned in my previous posts, the eastern part of the Province of North Sumatra was dominated by Malay people which is predominantly Muslim. That explains the ornaments and accents throughout the building.

There are some interesting thoughts I got while I was wandering around this palace. In primary schools, I spent semesters to learn all the popular ancient kingdoms in Java but barely can I name some ancient kingdoms from Sumatra. I believe it would have been wonderful if certain proportion of the “History of Indonesia” curriculum had focused to this particular island which in fact is composed by a relatively broader number of cultural entities than Java.

Another thing is that this monarchy system is still kept in practice although solely for cultural purposes. The youngest Sultan of Kesultanan Deli is around 9-year old and now living in Bone, Sulawesi. His mother is the daughter of the current Sultan Bone who married the previous Sultan Deli who died during a military duty. And that made this little 9-year old boy became a Sultan. It was something like that. Hahaha.

I closed the trip by going to the Polonia Airport. I took a flight from Medan to Jakarta, a shuttle to Bandung, and arrived safe and sound. This trip was totally awesome and I enjoyed every single day of it. At least I have stories to tell if someone asked me, “North Sumatra, what’s that? Is it somewhere near Bali?”