Entering a New Stage of Life 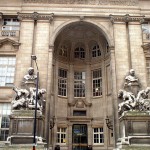 It’s been more than 2 months since my last blog post and surely many have happened. In April,I graduated from the BSc Chemical Engineering program of Institut Teknologi Bandung and was accepted by Imperial College London to enroll a MSc Petroleum Engineering this October. United Kingdom suddenly look much more tempting and challenging than The Netherlands for me. I did have a little risk-and-benefit analysis and eventually London came up as the winner. Yes, “eventually”, as it did take several months for me to think about this. Delft was good, Eindhoven was even better, but London seems to have some prominent winning factors.

A new name for my blog, a new design.

To mark this point of time of my life, I decided to do a little something to my blog, a simple retouch and a new name, MichaelHutagalung.com. I found the old design rather boring and literally boxy while the old name was rather odd, trying too hard to resemble the name of one famous Indonesian band, and simply immature. I could not even remember why I used that to name my blog in the first place. Anyway, this new design is a quick-and-simple modification of Platformate. What I did was editing some of the CSS properties, uploading some nice PNG background files, and adding a header logo. That’s it. Thanks to PNG transparency my blog now looks like this.

I’m into France and French culture.

I started to learn French in August simply to make my abundant free time useful. Yes, it was literally abundant that I could even wake up late at 9am. There was nothing particular that motivated me to enroll that course at CCF Bandung. I simply thought that it would be nice to have an added-value for being able to speak French when applying for a position at some companies originating from France (TOTAL and Schlumberger, aren’t they too obvious considering my academic background?).

But then, I realized that this particular country have so many interesting cultural points that I am so excited to dig them more. I ended up taking two intensive classes and three DELF (A1-A2-B1) examinations. Many asked me what were the reason I took the examinations and I said “Nothing, I guess I’m in love with this language”. Everyone was like “What?” and I replied “Well at least the fees are one-tenth of TOEFL’s so why don’t give them a try?”. Anyway, this late-August, I will be attending another intensive French course for 4 weeks, including several cultural and civilisation workshops, in Paris. Hahahaha.

I need to set my feet on my homeland so I would not ever forget it.

Yes, Tano Batak, my homeland in North Sumatra. Today, I am going to Medan and spend a week there to visit some of my relatives (all Batak people are relatives, right?). I will visit Medan, Rantau Prapat, Tarutung, Porsea, Siantar, Prapat, and hopefully Lake Toba and Samosir Island. I look forward to having a nice “pulang-kampung” holiday there. I hope I can upload some nice photos here. In the meantime, I have this nice re-arranged Batak song, originally perfomed by Christine Panjaitan and later by Viky Sianipar.

PS. I was interviewed by SWA Magazine regarding ColorLabs Project and by Jakarta Globe regarding this blog. Hahaha.