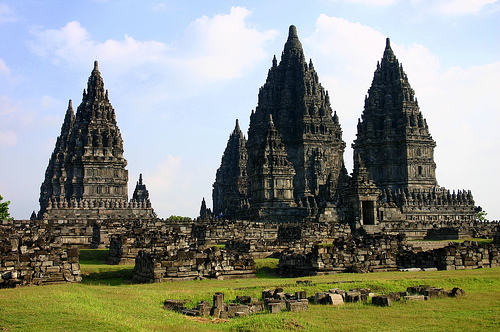 Having lived for around a year in the UK and extensively interacted with people from different countries have revealed some intriguing facts to me. Whenever comes the situation where one has to introduce oneself and make a casual conversation, it appears that it won’t go anywhere but around one’s country of origin. Not only is it always a good topic to begin with, it also translates into an infinite number of possible sub-topics which are useful to prevent awkward and dull moments with new acquaintances. That being said, it often brings up some interesting cultural facts which are always worth noting and remembering.

Here is one language-related example. It may seem ridiculous to some but I didn’t know that texts written in Arabic alphabet may not be Arabic at all. They can be Persian (in Iran), Urdu (in Pakistan), or many other languages in Central Asia and Africa. It had been used in the Turkish language too before they later changed to Latin. Likewise for the Cyrillic alphabet, I used to associate it with the Russian language, only. There was a multitude of Kazakh people in my class who have proven otherwise. Call me daft as you might, but I may not be the only one who never knew about this. There’s always a first time for everything, isn’t there? I know little, that’s why I learn.

Speaking of which, “Indonesia” also seems to be somebody else’s first time. It happens so frequent that it’s becoming my first supposition when meeting new people. In my case, however, thanks to the giant operations of international oil companies in the country, Indonesia has never been difficult to talk about. Balikpapan, Minas, Duri and Jakarta are the popular oil-centric regions and those names are always all over the place. Digging down the subject is another story, though. Just like how I used to assume, these people have also got their assumptions. Here is a list of funny questions and statements, which were posed by different people in different occasions. Probably you’re asking why I’m doing this. Well, there’s no particular reason, to be honest. I just want to see all the experience in a retrospect, considering that this date, last year, I left Indonesia and arrived in the UK.

Is Indonesia a country? Is it not just a region?

Ridiculous as it may sound, the question above was asked in a humble, honest and not-knowing manner, twice, by two different people. That was the sole reason that prevented me from responding with something sarcastic and full of condescension like “Did you fail Geography?” or “Have you suffered from any sort of mental retardation?” It’s mind-boggling to know that the people asking the question do know that Indonesia exists but are not sure whether it’s a sovereign country with all the law, regulations and political dynamics happening therein.

It’s very easy for people to correlate “Indonesia” with “Polynesia”, “Melanesia” and “Micronesia”. On the map, they all look like regions consisting of many islands and they are in fact bordering and overlying one another. Polynesia, Melanesia and Micronesia are not countries. They are regions which comprise many countries and colonies. Why should one think that Indonesia is not? So there comes the first fact: Unlike the other ‘nesias’, Indonesia is a country.

If you look at the globe, you won’t find many island countries. Some examples are the UK, the Philippines, Japan and New Zealand.

Was it difficult for you to learn the Latin alphabet?

I lost count of the number of times this question was asked. This question was conveyed in an assuring affirmative tone, often rather a compliment, and sounded like, “Your handwriting in the Latin alphabet looks so neat,” or even something imperative like, “Hey, Michael, teach me how to write my name in Indonesian!”

I was speechless. “What do you expect me to write?” I was left in both shock and amusement. I started writing my friend’s name in some random curvy lines that supposedly looked like a mixture of the Arabic and Thai alphabets, diagonally across the paper. I can’t speak or write either of them so they were completely fictitious. It turned out that they looked more like a 1-year-old handwriting. Yet I said, “This is how your name is written in Indonesian.” He took awhile looking at my doodle and said, “It looks like Arabic.” Three minutes later I told him that Indonesians use the Latin alphabet, thanks to 350 years of Dutch colonialism. He replied, “No, you’re lying.”

It didn’t really cost me any extensive research to find out why this was presumed. Look at Asia, count the number countries, their populations and their official languages. It turns out that the number Latin-based languages in Asia is relatively low. Some examples are Indonesian, Malaysian, Tagalog and Vietnamese. Again, thanks to the Dutch, British, Spanish, Americans and French people who paid us a long visit. There you go, the fact number two, the Indonesian language uses the Latin alphabet.

Is Indonesia a Muslim country?

Well, this has just got very interesting, hasn’t it? Most often this questions was posed in such a condition that I was not readily available for any sort of prolonged discussion. Answering ‘yes‘ might save me some time but that would mean I wasn’t telling the truth. Answering ‘no‘ would probably put me in a lengthy talk and answering ‘something like that‘ would definitely not suffice. The occasion has happened a lot that I’ve got to design a short, preemptive speech that would answer any subsequent questions. Here it is, the fact number three:

Indonesia is predominantly Muslim but it’s not a Muslim country. It’s not quite a secular country either because religion does play a major role in the government. According to the constitution, six religions are acknowledged: Islam, Protestantism, Catholicism, Hinduism, Buddhism and Confucianism. Religious freedom is protected by law but one must belong to one of the six religions. By that, one can’t be irreligion nor belong to any religious group which is considered outside the six.

One thing for sure, my little speech has never quite achieved its purpose as it always triggers further and deeper discussion. Nonetheless, I always love the facial expression shown by my friends when I reply to their question. They always say, “That’s really, really interesting.”

Starbucks: Do you care enough to vote?

Do you care enough to vote? I do. I often grumble about stuffs in this country; I even blog about that. Here comes the time for me to do something, to make a change. What’s the point of writing 1000 blog posts of complains if I don’t seem to care to decide the future of this country? One vote DOES count, seriously.

PS. That advertisement above is REAL. Check KOMPAS out if you don’t believe me.

One Guy Among Hundreds Unknown 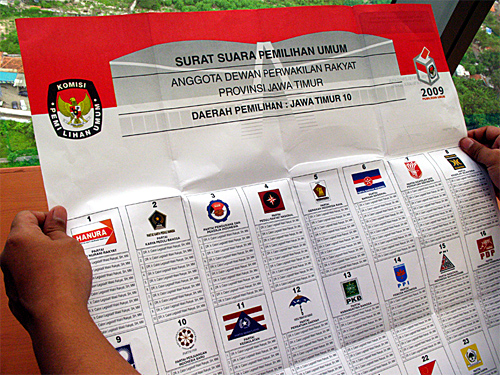 OK. Here’s the deal, we’re going to have a national general election on April 9th; it’s going to be big and is already scandalous. The thing is: we are all about to be given an enormous A2-sized A0-sized paper with approximately one hundred names on it; and among those one hundred unknowns, we are obliged to pick a name. What’s the point of that?

I am totally not a politician or even near to being a future politician. I never study politics or any related social sciences whatsoever. But for some reasons, I feel that there are so many weird phenomenons happened as the consequences of this so-called democratic system. Hail to those politicians and our delegates who designed this system; seriously, I am not posing any disagreement here. I believe you have your own arguments and I am not questioning you. I always try to be a good citizen, I say a BIG no to being abstain, and I am just hereby delivering things I have seen.

Ah, you’re so damn gorgeous. Young, sexy, and white, with a shimmering smile. How on earth you can be that cute and good-looking? Uh, baby, you’re always there through my days, looking at me with a warm welcoming face, standing there at the side of the road in such an inevitably gigantic size that I can’t stand to not look at you whenever I’m on my way everywhere, everyday.

That might sound extremely exaggerated but at I believe that you got my points. With everyone being given the right to vote for one out of, let’s say, eight delegates from a party, all those activists will try everything it takes to be as popular as possible, practically in any possible way. They all have their super-gigantic portraits parading throughout cities in Indonesia, congesting the sidewalks and pedestrians. Did I mention portraits? Yes, portraits: a representation of a person, in which the face and its expression is predominant. And funnily, some people end up affirmatively saying, “Wah, kok caleg sekarang ganteng-ganteng dan cantik-cantik ya?” or even “Eh, loe tau caleg yang namanya X gak? Cantik banget deh!”

To me, it is ironic. But, had I been them, I would not have come up with any other way of promotion either. It’s simple and it just works. Let’s say you have ten cutting-edge programs for our beloved country and then what? You’re going to write it all on those big “baligo” of yours? I would be shocked if there were anyone stops to read the details thoroughly. And let’s suppose that those 100 delegates were “responsible” enough that they give us comprehensive explanations about their programs. How many pages that would be?

What happens to “Pemilih cerdas memilih pemimpin yang berkualitas”? How can we even know their qualities? Or perhaps, their looks? That’s what you meant?

I might be wrong but I prefer the Pemilu system, where we were only obliged to vote for ONE party and let the parties do their works. Unfortunately for me, I wasn’t yet 17 year-old that time to feel the simplicity of a national general election. Unfortunately for all the citizens of Indonesia, there are way too many things happening in this country that just can’t make a national general election that simple, again.

Another controversial one. What do you think? 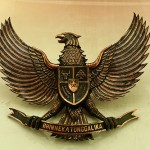 Later this afternoon, I got my eyes caught on an article entitled “Most Islamic studies teachers oppose pluralism, survey finds” published at The Jakarta Post on November 26. The post basically presents some statistical data, based on a survey conducted in public and private schools in Java by Center for Islamic and Society Studies (PPIM) at Syarif Hidayatullah State Islamic University in Jakarta.

These are some stats mentioned in the article:

And with no surprise, the article is now standing in the list of popular news at that online news portal. There have been some doubts questioning the competency of the questionnaire and saying that this is indeed a natural behavior of the majority in most countries. On the other side, many believe that this stats reinforce the idea that conservatism and radicalism not only develop on the streets like what has been campaigned by the FPI (the Islam Defenders Front), but rather deep within the education (system).

I personally find it difficult to even have an opinion on this issue, but at least, on the presidential-candidate issue, I reckon I need to second a great opinion made by Delvi Wahyuni:

If we have such a person, I will vote for him/her/it, no matter if that individual is a drag queen, a homosexual, a lesbian, a ‘heathen’, a punk, a dangdut singer, a crippled, an albino, an atheist,… You earn my vote though.

And bottom line, I only see the irony. Why should we be acting like this? We are all so proud of our culture and traditional remnants, as a unity: Indonesia; but why when it comes to religions, it always turns out this ugly?

Illustration was taken from here, it is Garuda Pancasila, the coat of arms of The Republic of Indonesia, on which written the motto “Bhinneka Tunggal Ika”, meaning: unity in diversity. 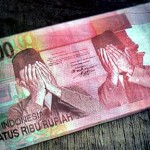