First of all, I want to say that I have made myself a record! How on earth can I have one blog post each day? Hahaha. I guess this was due to the fact that I had nothing to do but to eat and sleep during my abundant free time. On the other hand, I just could not help seeing my laptop intolerably unoccupied thus blogging was what I did. Anyway, this day is the fourth day of our trip and we’re finally done visiting tombs. I was glad to be able to visit my ancestors, get some insights about my family heritage, and learn the complicated family tree. From this moment on, it will be solely a holiday trip.

We arrived at Prapat at night and stayed in a nice hotel located just at the side of the Lake Toba. The hotel was clean and had large rooms with comfortable spring beds. We directly went to sleep and were too tired to go around check the view at night. We’re going to stay here for 2 nights so there will still be plenty of time for us to do whatever we want, I guess. Anyway, geographically speaking, Prapat, which is located in Kabupaten Toba Samosir, is one of the cities that circles the Lake and has become one popular tourism spot of the Province. Lake Toba and its environs are clean, beautiful, and considerably well-maintained by the government. We started the day by taking a boat from Prapat to Samosir Island. The island contains several small regions: Tuktuk and Tombok, to name some. 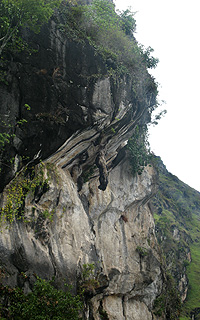 Before getting to the shore of the island, we stopped at Batu Gantung. It was nothing flashy but just an oddly-shaped rock hanging on a high cliff located at the side of the Lake. Legends say that there was a beautiful young lady from the Sinaga family who was forced to marry a prince. She disagreed and ran away from her house. Unfortunately, she did not realise that she were running on the top of the cliff and heading towards the Lake Toba just below. Just before the edge, she tripped with her feet stuck between roots, died in a very odd position, and turned into rocks. I spent minutes to imagine how this hanging rock could, in any way, look like a lady with her body turned upside-down.

Our next destination was Tuktuk. There were some nice hotel rooms decorated with Bataknese artworks; each with the famous A-shaped roof on the top of the buildings. We only took some photo there and found an oddly-shaped coconut tree. 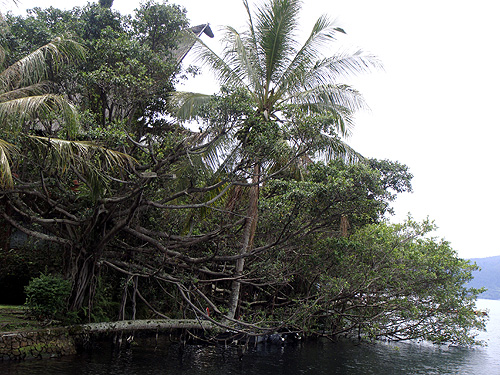 Do you see the oddness? This is a perfectly-edged coconut tree. I could not imagine how this coconut tree grew. How do you think it grew? I guess this tree did not naturally grow like that and I don’t look forward to hearing any “stories” behind this. Hehehe. 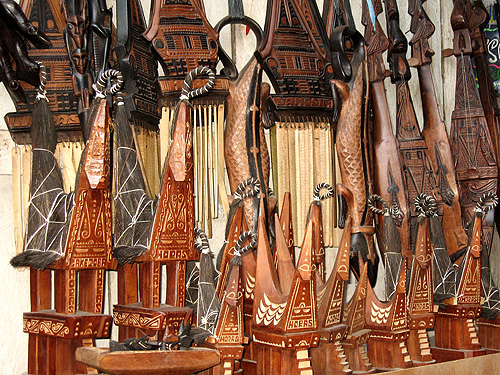 We ended our trip by going to Tomok, a region that used to be covered by water prior to the arrival of the Dutch armies. For your information, the Dutch drained the water to Sungai Asahan for power generation purposes. Tomok is also one of the popular spots for both local and international tourists coming to Lake Toba and Samosir Island. Above are a picture of some souvenirs sold in the souvenir shop. The picture, at the background, shows Bataknese calendar written in Bataknese numbers and at front, miniatures of Bataknese traditional houses. 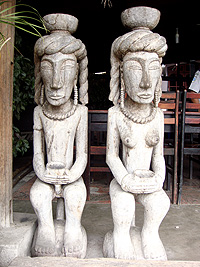 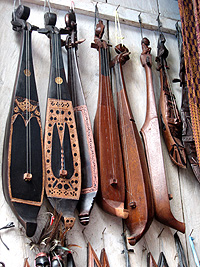 On the top-left is a picture of a statue of a man and a woman; this small statue is located just near the Tomok bay. On the top-right is a picture of Bataknese musical instrument which are sold as a souvenir in shops throughout the region. The real version of this instrument is bigger and sounds a lot better.

Tomok itself is also a region where the tomb of Raja Sidabutar located. I did not expect to visit anymore tombs but apparently I just did. Again, another legend was told. 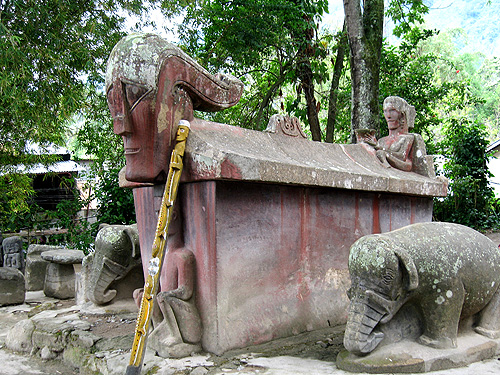 Stories say something about the king, his loyal queen, and his loyal general. The general was famous for his war epic and for his journey from Aceh to Samosir riding elephants. Legends also mention some background story about gecko (cicak) being the tribe’s symbolic animal and about reasons why Bataknese cultural products are often coloured with red, black, and white. Below is a picture of some statues doing the traditional ritual asking for rain. The real ritual is still conducted to date but is forbidden to be seen by visitors.

That’s all for the day. It will be Berastagi and Siantar for the next 2 days and Medan will finally be the ending point of this homeland journey. Anyway, I’ve just realised that I love taking pictures (of any objects, including of myself although I don’t put any here). I guess this is a sign that I’m about to have a new “toy”. Hahaha.