Tano Batak Day 5: Thoughts on The Establishment of The Province of Tapanuli 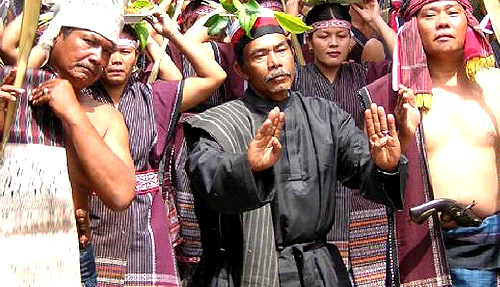 There was nothing essential this day, it’s another half-day in Prapat, a quarter-day in Pematang Siantar, and a night at Berastagi doing nearly nothing. We spent most of our time on the road laughing and screaming to make ourselves happy while crossing the borders which happened to be so lenghty and exhausting. The infrastructure was terrible and unmaintained but we had no choice. Thus, since I have been lately situated at the region concerned and have heard several opinions about this “Province of Tapanuli” issue, I guess it’s the time for me to write something about it.

This issue was brought into public on February 3,, the day when a riotous incident occurred at the office of the House of Representatives of the Province of North Sumatra that killed Abdul Aziz, the chief of the office. The riots were struggling for the establishment of the Province of Tapanuli which essentially means to separate themselves from the current province.

Despite the issue has become popular just several months ago when an incident occurred, it has been in fact proposed for a long time and become intensely discussed after the autonomy law has been put in place. The Province of North Sumatra was formerly two administrative regions that was fused into one province just after the independence of Indonesia from the Dutch. Keresidenan Sumatra Timur covered the eastern part of the current province including Medan, Asahan, and Labuhan Batu, while Keresidenan Tapanuli covered the western part including Tarutung, Toba-Samosir, and Sibolga. The information on the borders may need to be verified but basically that was the idea.

Due to the differences in cultural and religious background between the two regions (Tapanuli is dominated by Bataknese, particularly Toba, while Sumatra Timur by Melayu people), this particular issue has been (misleadingly) regarded concerning and based on SARA (suku - tribe, agama - religion, dan ras - race) which made everything even more sensitive and complicated. In spite of the fact that these two regions differs culturally, it was for economic and human development purposes the proposal has been made. Identical to the centralised development which is currently happening in Indonesia, which is all the way focused to Jakarta and some cities in Java Island, the same condition is happening here in the Province where developments are focused to Medan and several cities in the eastern part of the Province.

Even so, considering that this is Indonesia and politics do have its invisible hands, that does not necessarily mean and assure that no strings are attached.

Anyway, likewise expansion has been happening in several provinces throughout the Republic, Banten-West Java and Gorontalo-North Sulawesi for example. Banten, which is dominated by Badui people, has become an independent administrative entity and was separated from the Province of West Java, which is dominated by Sundanese, in order to accelerate the economic growth and human development in the region. Development was centrally focused on Bandung, the capital, and on several regions that circles Jakarta, the capital of Indonesia. It is undeniably true that Serang and several cities where Badui people reside are left behind. And in addition to the Banten development roadmap, the newly-established province also put the Islamic Sharia law in action while the Province of West Java does not. Some say that this expansion was greatly influenced by religious purposes.

Gorontalo-North Sulawesi issue was even more interesting. Gorontalo was separated from the Province of North Sulawesi and is dominated by Gorontalo people which happen to be predominantly Muslim. The current Province of North Sulawesi is dominated by Manado people which mostly have Christianity as their belief. On the other hand, it is factual that economic growth has been focused on Manado, the capital, while Gorontalo is left behind. The only dissimilarity of these two particular examples compared to Tapanuli-North Sumatra was that these two had succeeded their mission without any incidents.

Although the provinces of Indonesia might not be considered identical to states (negara bagian), they are starting to look like one due to the fact that each administrative entities do have the rights to enforce its own regional laws. The current system also provides each entity the rights to control its finance and resources.

So, what about this Province of Tapanuli? Should it be realised? And what about Indonesia in general? What if this establishment triggered separative movements amongst the provinces? On the other hand, would it be wise to leave some regions left behind? Anyway, is it money and power these guys are after? And what about SARA that seems to influence these separations (expansions)? Should we just admit it and take it as is? And why this became an issue while Gorontalo and Banten did not?

And historically speaking, it’s also noticeable that provinces in Indonesia were established with regards to religion and culture uniqueness compared to its surroundings, Daerah Istimewa Aceh and Daerah Istimewa Yogyakarta are two clear-cut examples.

As for me, I just regret this had to take a deadly incident.