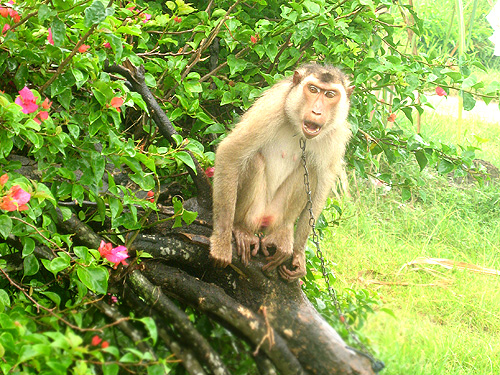 We spent the whole day in Rantau Prapat, the capital district of Kabupaten Labuhan Batu. The district is comparably small that we could drive west-to-east in 30 minutes. The road is wide with relatively low number of vehicles. There is only one shopping centre called Plaza Suzuya (that’s an odd name and sounds very Japanese to me) and located in the middle of the district. It does not look like any shopping centres in major cities in Indonesia, of course. That does not make me feel ashamed but on the contrary, I wonder why the fact that Labuhan Batu being one of the richest and most resourceful “kabupaten” in Sumatra Utara is not really well-reflected by the conditions of its capital district.

There were not many activities we did during the day, we only visit one cemetery where our relatives were buried. It is a Christian cemetery and this kind of cemetary is commonly decorated with ceramics and marbles. Tombs usually take a lot of space but not as much as that of Chinese. Some of them look very flashy with vibrant colors and unique decorations like a potrait of Jesus Christ or Virgin Mary. Some of them are fenced and built with stone awning. There is also one thing interesting with Batak’s cemetery: there are so many lines written on the “batu nisan”. The first line is “Dison Maradian” and the second is “Ompung XXXX YYYY” while XXXX YYYY is the name of their oldest grand-children born from their oldest male kin. That is one example of patriarchy in Batak culture. Anyway, the third line is finally the name of the person, the fourth signifies when the person was born and died, and the fifth until the tenth are verses of the Bible or sometimes verses of Christian Batak songs.

During our visit, my parents brought up a tickling story that around 20 years ago, when we had been visiting this cemetery, I had asked them one stupid question wondering why everyone buried was named “Dison” with a surname “Maradian”. They had laughed and replied that it was actually not their name as “dison” means “here” (di sini) and “maradian” means “lies” (beristirahat). I did not remember that and I guess it’s totally understandable I had popped that question up considering “Dison Maradian” sounds like a perfect Batak name. Hahaha..

Afterwards, we spent the whole night in Pulo Rakyat, one of the districts of Kabupaten Asahan. Funny that the district used to be called Pulo Raja as “raja” means “king” while “rakyat” means “people”. We visited another cemetery there but this one was a Muslim cemetery. I do have some relatives who converted to Islam due to marriages and we all do live together in peace and happiness (It’s like I’m stressing something here). Anyway, unlike Christian’s, this Muslim cemetery is relatively smaller and simpler. Rarely I found Muslim tombs with fences and stone awnings. Some tombs were decorated with Arabic calligraphy and the “batu nisan” was smaller and did not contain as much information as those of Christian Batak. But I believe that this differs a lot from place to place and I can’t say too much about Muslim Batak cemeteries.

Satellite TV in every house

Who says that satellite TV is a property for the rich? No, it’s not. Every house here does have satellite TVs regardless the financial situation of the family. I have seen one house, which is in fact non-permanent ones considering that it was not built using bricks and cement but bamboos and woods, that has an enormously gigantic satellite receiver and is even bigger than the size of the house itself. Why? Because here it’s the only way to receive TV signals.

That’s all for today. Tomorrow I am going to visit some areas where Batak people originated from (Yes, because not all area in North Sumatra is the homeland of Batak people). The area I’m going to visit is the very area that at the moment is one hot topic among politicians: Tapanuli. Whoops, that sounds politically spooky. Hahaha.

PS. So what does the monkey on the picture have to do with this post? Well, nothing. I should have put a picture of the cemeteries but I don’t want to make my blog look scary. So I took a picture of a monkey which was for some unexplainable reason sitting near the cemetery gate.