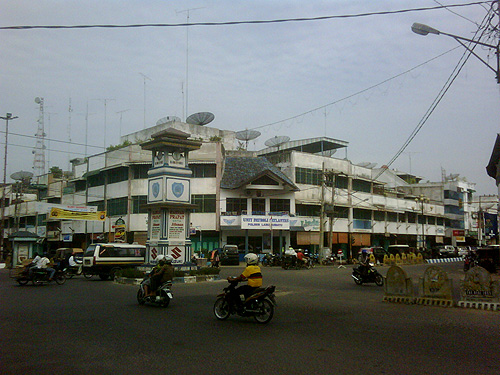 Yesterday was my first day of my Tano Batak Trip. I flew with Garuda Indonesia, departing at 07:00am from Soekarno-Hatta Jakarta and arriving at 09:00am at Polonia Medan. The plane departed 30minutes late but I did not really care about that (of course, at least until I live somewhere where everybody is punctual. Hahaha).

Garuda Indonesia was nice in general. The check-in process was relatively quick, one could even do an internet check-in if they wanted to choose their seats in advance. Its own dedicated Terminal 2F was considerably clean, there were no complicated additional queue lines for insurance fees, like the one I had had at Terminal 1 around a year ago with Batavia Air.

We arrived at Polonia safe and sound but experienced something inconvenient when waiting for the luggages. There were porters with their trolleys ready, that’s normal, but they were too many that there was no trolley left. It’s like we were forced to use their service if we want to have trolleys. Thanks to the fact that luggages are commonly created with rollers.

We directly went to Rantau Prapat, a small city located 280km from Medan, and it’s not Prapat and those two cities are different. Anyway, it took nearly 8 hours to get there and it was exhausting. But that was all right, it’s where my father and mother spent their childhood before finally moved to Bandung. This journey will be great and nostalgic so I’m good with any inconveniences.

Yes, it was shocking. I thought Jakarta has the worst drivers but I was wrong. Now I know that Medan has even worse. In Bandung, beside motorbike riders, angkot drivers has been long known as the worst. But in Medan, most drivers act like angkot drivers and the angkot drivers drive even worse. They will sound their car horn whenever possible. It’s like they can’t wait for any kind of delay and do consider people crossing the street as a serious delay that they will sound their car horn as loudly as possible as if they see somebody doing something forbidden. It was crazy.

Telkomsel and XL have 3G coverage but only XL’s is working for 3G internet connection. Odd that Telkomsel Flash is not working here. Indosat does not have 3G coverage here and I have to use GPRS. But I’m good as I’m ready with this and have brought three different SIM cards.

This is heaven. We can find any traditional Batak food we want and it was very delicious. If you’re on diet, simply forget it as it will never work here. Hahaha. Batak food here are so tasty, (unhealthy), and abundant. Any variety of it is simply worth to try: sangsang, babi panggang, babi goreng, babi arsik, naniura, lomok-lomok, and the list goes on. Chinese food is also popular and also very tempting: mie pangsit Medan, kwetiau, babi merah, etc. And to end our meals, we have some cakes like Bolu Meranti and Bika Ambon.

Well, this is going to be a great and wonderful trip!