“Indonesia, the only OPEC member in South East Asia will leave the organisation today. The announcement comes as the country’s annual output stands at 49% of its peak and industrial disputes have slowed new developments. The country now imports close to 30% of its domestic oil needs.”

You may read the article here (if you don’t believe me) and you should also read the BBC UK’s version. 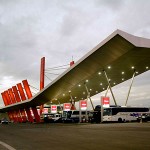 The BBC’s Lucy Williamson in Jakarta says the decision is not unexpected, since Indonesia’s production - largely concentrated in northern Sumatra - has stagnated and it has precious few sources of proven new reserves. But she adds that ministers are leaving the door open for it to return, should any future discoveries of oil transform the state of its industry.

Indonesia’s exit will not affect the amount of oil it produces or imports.

“I don’t see any substantive loss, other than on the prestige,” said Victor Shum, from energy analysts Purvin & Gertz.
“They really have not had much influence within OPEC.”

A few months ago, I have a question about this in my mind; putting it into discussion with some friends at my campus.
“How can Indonesia still be a member of OPEC considering the conditions we are facing now?”
Well, I guess I’ve just have my question answered.

Come on, Indonesia.. Promise us you’ll be back!

Image was taken from here.