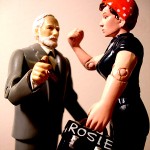 What is your opinion on this issue? All the women privileges that we know in our society; are those really meant to respect them because they are women? Or perhaps it’s just a euphemistic way to tell them that they have some certain “stereotypically nature-born” incapability? Let’s say: female parking?

And for women, will you feel honored having such a great ease when parking your car or perhaps you might feel irritated because in your mind, you think that they’re just saying: “Your existence here will bring a catastrophic sluggishness in the parking queue line, so please park here, get out, and go shopping now.”

Please mind the phrases inside the quotations above, “stereotypically nature-born”. I do believe in equality of men and women, but I do also believe that there are some commonly accepted stereotypes about women, and so does it about men. And there is where the interesting part lies: how women react to those honorary privileges (considering the stereotypes), and what actually is in our mind, men, when we treat women in a special way.

What is in man’s mind?

It is generally believed that women are humans to be respected and they deserve to be treated specially in order to honor them. Let’s say some examples in daily live: women are to be seated when there is only one seat left in the bus, and men are to open the door and to let women walk into a room before themselves. Gentlemen do that, how noble.

But, in fact, there are some undeniable viewpoints, mostly from men, which do not really feel so noble. “Women as a slow and easy-to-panic driver” is one example. Men, have you ever been in a totally unreasonable “local” traffic jam, as it was caused by only one car that took a very long time to turn her car in the U-turn? And you ended up saying, “Pantesan.. cewe sih yang nyetir..” Men who called himself gentlemen do that as well.

Do you see the inconsistency? The man in the first example did such noble things to honor women, but the man in the second example explicitly shouted out his negative stereotype about women. Then, what if I say that perhaps the gentlemen in the first example acted so noble because they do believe in some “incapability” that women have and they wrap in some way so that it will look noble from the outside? I believe some men have it that way.

How does woman react to those honorary privileges?

I once asked my girlfriend about her point of view on this issue; specifically about the female parking. And lucky me, she said that she will feel very happy to be given such privilege. It would take less time to park her car and more time to do her activities. But imagine if she is a woman who is being oversensitive to gender issues and take it the hard way. I guess she will feel contempt and humiliated, then will probably end up finding another “equal-to-men” parking sites.

Being equal, how far can it go?

I do believe in the equality of men and women, we all should have the same rights in every aspects of life. But, how far can it go?

Dian Sastro herself prefers to use the word “actor” instead of “actress” for the sake of gender issues. Well, I can’t image if she were French. A pronoun for a group of 1000 people consisting 999 women and 1 man is called “ils” (“they”, in English) and is considered masculine. And not to mention about all the adjectives and nouns that have masculine and feminine forms. It is indeed ultimately sexist. But, is it something really essential and needed to be “equalized”?

Women, what do you think about gender issues and equality? What will be in your mind if you are provided with some “specific-gender” privileges? Will you feel honored, or humiliated? And how far that we all need to be equalized? That “linguistically inconvenienced” far?

Illustration was taken from here.